I woke up early on Tuesday while Casey and Abenezer were still sleeping. I went down and got coffee (that tiny little cup of some major strong stuff) and sat on the steps of the hotel and just tried to soak all of Ethiopia in. I wanted to remember all of it.
This was the day I would meet Abenezer's mother and I was pretty nervous about it. Sally prayed with me before I went. I wanted to make sure and get there at the right time because I didn't want an awkward meeting outside of the gate without Almaz there to guide us. Well...God seems to like letting me know that I am not in control. Because..on the way there....Abenezer and I turned the corner to walk up the road and a gentleman came and started to talk to him and give him a hug (this in itself was not unusual because the ethiopian people love children and will give them attention) so we continued to walk with Abenezer holding my hand and this gentleman's. John looked back questioningly (he walked up with me to HH) and the gentleman said to me "I am his father" .......Oh man.
He at first thought John was my husband and we got that cleared up. As we went in, A's mom and maternal grandmother was waiting and another relative (an aunt I think)....I was very nervous but they all three set me at ease pretty quickly. They had gifts for A (ethiopian dress outfit, some pop and candy for him to eat, a necklace, and photobook and his favorite clothes) The photobook was very emotional for me. It showed me what a loving family that he was a part of . There were pictures of birthday parties and group photos with friends and family. It reminded me what he was losing.
We talked and hugged and did lots of picture taking. I asked them what they wanted me to convey to him and the told me that they loved him and for us to raise him in the Lord and to raise him to love the Lord and serve Him and everything else would be all right. I told them that their heart was my heart. At this point the paternal grandmother came. She immediately went to A and hugged and kissed him...she them came and hugged me and held on to me fiercely..she had a bouquet of flowers that she gave me. She was crying and that's when Casey and I both began to cry. Alot more pictures were taken..most of them have me sobbing. Almaz came and gave me a hug at some point during the process. It was all just heartbreaking to me and seemingly so unfair to them. Their sacrificial love was so amazing to me. I still cannot comprehend it. A at this point was beginning to be confused and upset. His dad stepped down to talk to him and hug him and placed his hand in mine and the family began to walk towards the gate...his dad looked back and saw him crying (we were both kneeling on the ground crying at this point) and came back and took a tissue and wiped the tears from his eyes and spoke tenderly to him. He then left. Abenezer and I went to a chair and sat down and I just held him. A young girl about 8 came up to us (an orphan at HH) and looked at us and said "God is love"
As hard as this way to go through ( and honestly, I have a hard time even writing that is was hard because in comparison to his mom and dad's pain, mine was minimal.) I am so glad that I will have those pictures and memories to share with Abenezer. His family were beautiful people. It was also a beautiful picture of sacrificial love. I hope and pray that we will all love our children and everyone else enough to set ourselves aside--whatever that may mean in our lives...
Please remember them in your time of prayers..that God will give them an assurance of A's well-being and that He will be their comfort...Also for their physical health. 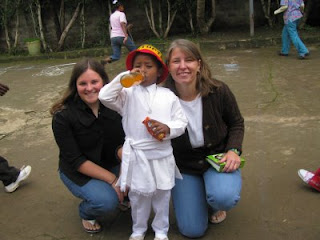 His dad took this picture during our meeting. Abenezer is wearing the traditional clothing they gave him.