Sunday we celebrated Abenezer's fifth birthday. We had all of his favorite food.

and of course CAKE!


He had a great time and was so thankful for every gift. The winner of the favorite gift award goes to Uncle Randy and Aunt Janice (and Casey and Chris)! It was the spiderman web blaster. He cheered when he opened that.

He woke up Monday morning (he is still sleeping with one of us every night) and gave me and Greg two of the cars he received. We kept telling him that they were given to him and that we want him to have them and he kept telling us " No, For you" The boy would give anything away if he thought it would please you. He even gave us his drink yesterday at lunch ....he came and poured it out of his cup and into Greg and mine (Daddy was a good sport..you know he doesn't like backwash)

This is the traditional outfit that his parents gave him in Ethiopia..He wore it to church on Sunday morning: 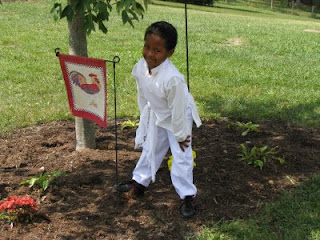 He then came home and changed into his other ethiopian outfit. Notice the sunglasses on top of his hat! 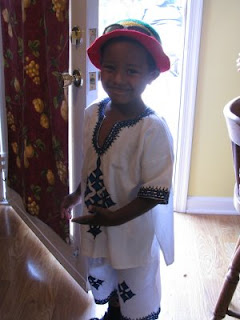 Abenezer with his cake and himbasha. In all of the pictures his parents gave us, when they celebrated his birthday, the cake was on top of the himbasha. So we did the same thing. 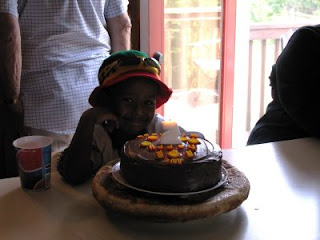 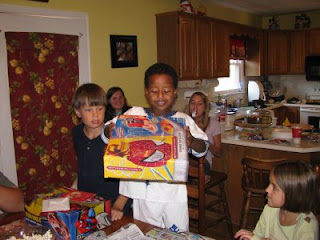 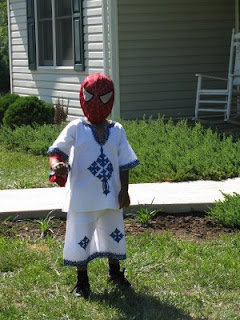 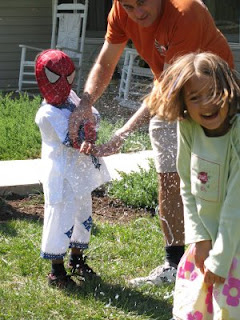