The last time we had contact with Ab's family, they gave me their church's email address to use. I hesitated a while to use it, but they asked some questions that I wanted to give them answers for without waiting for mail. So I took a leap and sent one.

Their pastor, Pastor Henok, sent me a wonderful email soon after thanking us for what we are doing for Ab, his family, and Ethiopia.

I just received another one today. I had sent an email asking about some relatives of Ab in America and trying to place everyone in the right spot. Pastor Henok emailed me back and told me that Ab's parents testified in front of the congregation for what God is doing in their family.

I am in awe that God placed Ab with us, that we were willing to have contact, that his parents wanted contact, that his Pastor gave us his permission and blessing to use his email , and that I am so bonded in my heart to these people and their country.

Ab climbed up in my lap this evening and after those emails, I cannot even begin to describe how good his hug felt.
Posted by Charisa 2 comments:

I Need Africa More Than Africa Needs Me!

Email ThisBlogThis!Share to TwitterShare to FacebookShare to Pinterest
Labels: adoption, thoughts from the heart, zambia 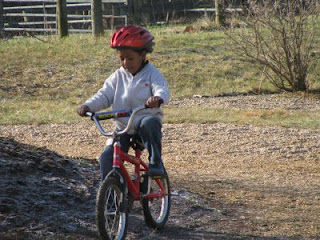 Thanks to some friends who gave us a bike, Ab now has bike riding down! He worked and worked and worked. The first thing he'd say when he got up or when we got home "Can I go ride my bike?" In 2 days, he was flying down the neighbor's lane and I was flying out the door to go get him :) We do live back aways so there was no danger of the street, just danger of him busting his head open. No big crashes yet!
Posted by Charisa 1 comment:

We had a big surprise this past week. Ab has now been home 7 months. It seems like so much longer and yet so much shorter at the same time. Not sure if that even makes sense!

He has been praying fervently the last several weeks for his family. That God would heal his mother's leg and help his father find work. I encourage this and am touched by it.

Greg went out of town last week and while he was gone Ab and I had a talk about lying and in the middle of that we talked about what he was 'thinking in his heart'. That 's what he calls it. I do this so I can see what may be causing him to misbehave or act out. Well, one statement caused to me ask some questions and I found out that he had been thinking that if his mom's leg did get better and his dad did find work, that he could go back home to Ethiopia! That broke my heart for him. I was shocked. I pulled him onto my lap and we talked about why he came to America (re-enforcing what his parents told him) and how much they love him and how much we love him. I validated his feelings of the unfairness and told him he has been so brave during all of this.

I then had to break the news that he wouldn't ever go back and live with them. It nearly killed me to do this but I felt that I had to be honest and I didn't want him to have a false hope. He looked away and began to tear up and then sucked it all in and looked at me and said 'I'm fine'. Fine?? How in the world can he be fine?? I held him for a while hoping that he would just let loose and bawl, throw a fit, whatever he needed to do to work through it. But he just hopped up and went to play.

He prayed that night and thanked God that he had 2 moms and 2 dads.

He began to pull out his picture books again of Ethiopia and look at them. He goes through stages doing this. He did fine all this week and hubby and I went somewhere on Sunday night while Bekah stayed home (which is usually fine, he is very bonded to her and loves her dearly). While we were gone, Bekah called and said he was sobbing. We talked to to him and he just said he missed his mom and dad and them caring for him. We came home and talked some more and encouraged him that it was okay to be sad and okay to cry.

Please pray that we will have wisdom and know what to say and what not to say. We have received more letters from Ethiopia, one from his best friend and one from his family. (which I love being in contact with) but we are waiting a bit until his feelings aren't so raw to read them to him.
Posted by Charisa 5 comments:

Where's the Mountain? Can we go to Ethiopia?

We went hiking last Sunday. We tend not to exlain too much details to Ab when we are going somewhere because it will lead to a million questions that are hard to answer and gets him even more confused. We had just told him we were going to the mountain. After a drive up the mountain and getting out, he stood there and looked around and asked "Where is the mountain?"

Of course, we all had a good chuckle over it. My response? "You are standing on it!"
We had to have a long conversation yesterday with him. He had asked to go to Ethiopia again. I explained to him that if we went now, it would make him really sad when he had to leave again. He asked me why we would have to leave. I told him that we couldn't live in Ethiopa because we wouldn't have a house there and daddy wouldn't have work. He looked really confused and told me that there were houses there..... more discussion....I finally told him that his mom and dad in Ethiopia wanted him to live in America so he could grow up and be healthy and strong (he has told me that's what they told him.) I am not sure if that was the correct way to handle it. So much of it is a guessing game on what he can handle knowing. I think sometimes he thinks he is on a 'vacation' of sorts. He constantly asks when he can go back. He has $6.00 that he says he is saving up to go.
Please pray for me that I have wisdom to know how to answer him. 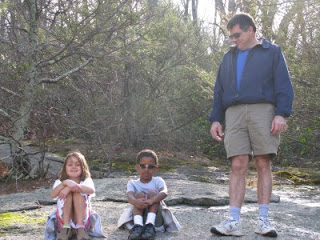 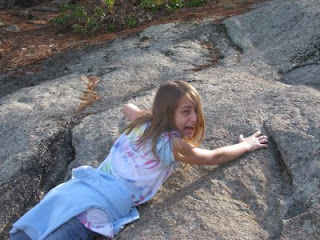 Bekah 'falling off the mountain' 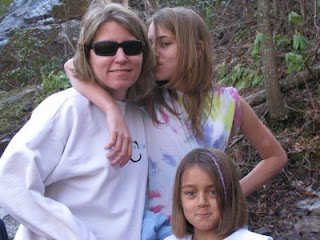 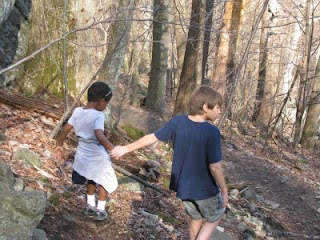 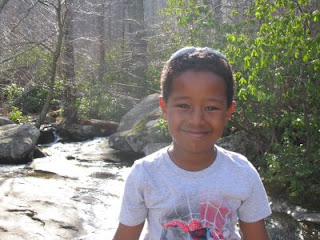 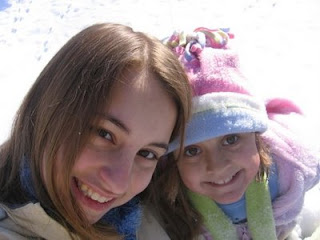 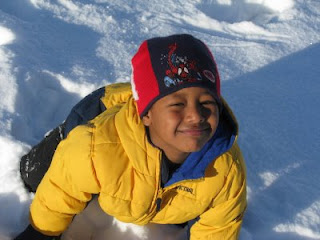 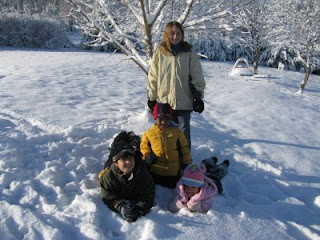 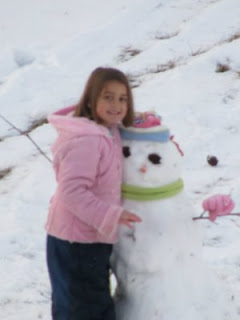 Posted by Charisa No comments:

We have enjoyed about 6 inches of snow the last couple of days. Yesterday , the temperatures dropped drastically. All four kids were outside playing for quite a while, building forts, sledding and all sorts of snowy things. They all came busting through the door and Ab was just crying.

Reason: He had his first experience of feeling like you have frostbite.

He had got snow down in his boots so his socks had gotten wet and of course that made it even worse. The poor thing just sobbed. When we finally got him calmed down and eating some soup to warm him up, he said "I don't know what's happening to me!" Poor guy. Who knows what he thought was happening!

But, he was ready to go back out this morning...He said it was too hard to come in when he gets cold because he wants to stay outside!
Posted by Charisa 1 comment:

Reality of Being Tired and Evaluating Life

I am tired. Winter tends to tire me out anyways. I don't do well being cold. My husband says I am grouchy when I am cold! :)

Day to day life is tiring me out too. A pre-teen dealing with the reality of life and people aren't always who they say they are and 2 elementary children competing for my attention. Middle school Josh is just hanging out and building legos. We call him our ' mad scientist' down in his room. :)

Ab walks around all day saying 'momma' (put this in the doll voice that I know you are imagining). He still inhales his food and constantly measures food, drink, whatever to Rachel or the others.. We are having to be extra vigilant with any TV because he believes anything he sees to be real. We are having to still explain at least once a day why we can't go to Ethiopia right now. He likes to pretend not to know stuff during school time so that I will spend more time with him. We have a conversation usually once a day on what is a lie and what isn't. He still clings at home.

I have for the last week begun to examine my activities and life. Even though I cut back when we started the adoption process, I think some more pruning is in order. I am so busy doing this or that, that when we are home, I am not connecting like I should with any of the kids. That is especially not good for Ab. We both need some more connecting and learning about each other. Our whole family needs this.

Pray for me, that I am wise, patient, and filled with God's love.

Crazy thing ?? As tired and stretched as I am, I just told a friend that I'd start the adoption process again in a heartbeat. It can be a bumpy road and a tiring one and even at times a lonely one...but I wouldn't trade it for anything. God has taught me so much through this process and is refining my heart in more ways than I thought possible.
Posted by Charisa 2 comments: