The Start of a Great Nation

Joseph’s brothers are sent home (with gifts-Benjamin again receiving much more than the others) to collect their family and their father and bring them back to Egypt with the promise they will be provided for. Laugh of the day—Joseph tells them “Don’t quarrel on the way!”

Joseph’s family moved to Egypt.  God reminds Jacob in 46:3 that He “will make him into a great nation.”  and that “He will go down to Egypt with him.”  Again, God reminding His people that He will be with them.  I will be with you is promised again and again.  Remember that—let it settle in your heart. Your God is with you!

Now they get to Egypt and Joseph tells them to tell Pharaoh that they tend livestock.  Shepherds were detestable to the Egyptian people.  Pharaoh kept his word and Jacob and his family were able to benefit from his generosity but also live apart from the Egyptians.  A win-win situation.

The famine continues.  Everyone has used all their money, sold all their livestock, and then sells their land to Pharaoh (through Joseph) to buy grain.

Here we see the result of God sending Joseph beforehand (through his brothers deceit and wrongdoing) to save his family and really, the entire nation of Egypt.  Without Joseph’s ability to interpret the dream and store up grain—there would have been no grain to buy and the result would have been starvation of many people.  The Egyptians tell Joseph themselves that he has saved their lives.

The Word tells us that the Israelites settled in Egypt, acquired property and increased greatly in number.  The start of a ‘great nation.’

Ab wrestled again yesterday…Here is one of my favorite pictures of the day. He had just finished wrestling one round and is getting instructions from the coach. He was so intense.  It’s not a great picture since it’s a still from the video but I love it.

I’m not a great wrestling mom!  I hold my breath watching anyone wrestle waiting for them to get hurt—especially the older kids! All that grunting and straining…then the young man besides us who was talking to us (he wrestles on a high school team), tells us he can’t wrestle for 8 weeks because he broke his shoulder in practice.. 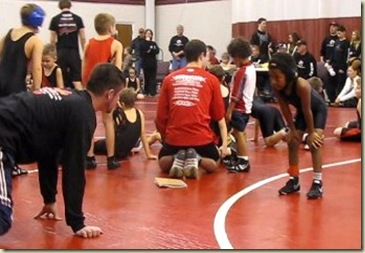