Below is a picture of a statue that I bought in Zambia on our first trip. While I was there we were in the adoption process with Abenezer. In fact, I received his referral a week after coming home. I bought this statue knowing we’d have an extra person in our family. I bartered (or actually had a friend barter for me—once you get into millions in kwachas—I am totally lost-I do good to barter at yard sales with our money!) and then when I got home we noticed that it had an extra child! 5 children instead of 4! I joked that we are supposed to have one more. Greg joked that he would make the extra child into a dog by gluing ears on it!

Well……The statue will be right after all! Greg and I have prayerfully made the decision to pursue another adoption in Ethiopia. Are we nuts? Yep…I’ll confirm it for you so you won’t have to wonder.

We covet your prayers as this time will be a huge step of faith financially. But we know that what God calls you to do, He will accomplish.

A funny thing—when I told Rachel she smiled huge and yelled “I’m having a baby?” 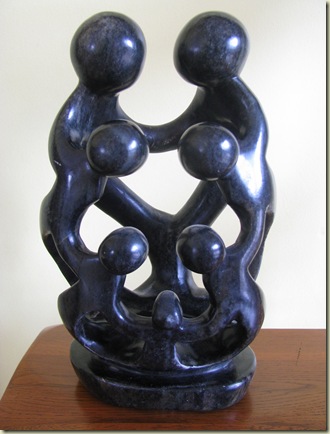 Chapter 13---What I love about this chapter is that we see what God thinks. vs 17—He did not lead them one way even though it was shorter, but led them another because He didn’t want them to change their minds and return to Egypt because of war. He took them one way even though the other way SEEMED better/easier/shorter. How many times does that happen in our own lives? What SEEMS better/easier/shorter is not best for us.

They take Joseph’s bones (they kept the promise of their forefathers to him.) God led them by a cloud by day and a pillar of fire by night. I would love to have seen that? How close could you get? Were the children longing to run through the cloud? Did the fire radiate heat? How big was the cloud and the fire? I would love to know more about that…I think I’ll ask God to show me in all that time we’ll have in Heaven with Him!

So Pharaoh changes his mind and follows in pursuit—and catches the Israelites. They cry out in terror to the Lord and pretty much say to Moses “What were you thinking bringing us here?” God answers and tells Moses what to do.

Now jump to vs. 19 “Then the angel of the God who had been traveling in front of Israel’s army , withdrew and went behind them” It doesn’t say…but could they see the angel? Did they even know he was there?

The miracle of parting the sea occurs and God thwarted the plans of the Egyptians. The Israelites see God’s great power and feared Him and put their trust in Him and in Moses.

In Your unfailing love You will lead the people You have redeemed. In Your strength You will guide them to Your holy dwelling. Exodus 15:13

Back to grumbling people…God intervenes and instructs them to listen carefully to His voice, pay attention to His commands and keep His decrees. Good advice :)