Last night I was blessed to be able to go to Spanish version of Lamb of God in Harrisonburg with our friends and two missionaries from Honduras. It was neat to hear the songs sung in Spanish and trying to pick out words we knew. The gospel of Christ is moving—no matter what language. Though I would have been blessed if the gift of tongues would have been given to me for a couple of hours. :)
It was also a blessing to hear the heart of brothers in Christ in Honduras. They work with Advancing Native Missions.
One of my favorite things of the night was at the end of the play. The pastor asked that as the shofar blew 3 times that we lift up our requests up to God with hearts full of faith . I stood among the congregation as a young man came and blew the shofar. The church lifted their heart cry to God who loves us so much that He sacrificed His Son.
As a person who loves the Old Testament traditions (and have wanted a shofar for my own!)—this was very moving to me. 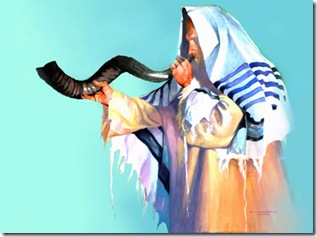 I found this from the Jewish Virtual Library if you want to know more about the shofar.


A shofar is an instrument made from the horn of a ram or other kosher animal. It was used in ancient Israel to announce the New Moon (Rosh Chodesh) and call people together. It was also blown on Rosh Hashanah, marking the beginning of the New Year, signifying both need to wake up to the call to repentance, and in connection with the portion read on the second day of Rosh Hashanah, the Binding of Isaac (Genesis, chapter 22) in which Abraham sacrifices a ram in place of his son, Isaac.
Today, the shofar is featured most prominently in the Rosh Hashanah morning services. It is considered a commandment to hear the shofar blown.
There is a great deal of symbolism tied in with the legal requirements for what constitutes a proper shofar. The shofar of Rosh Hashanah, whose purpose it is to rouse the Divine in the listener, may not be constructed of an artificial instrument. It must be an instrument in its natural form and naturally hollow, through whom sound is produced by human breath, which God breathes into human beings. This pure, and natural sound, symbolizes the lives it calls Jews to lead. What is more, the most desirable shofar is the bent horn of a ram. The ram reminds one of Abraham's willing sacrifice of that which was most precious to him. The curve in the horn mirrors the contrition of the one who repents.
In the Talmud, we read: Rabbi Abbahu said:
Why do we sound the shofar? Because the Holy One, blessed be God, said: Blow me a ram's horn that I may remember to your credit the binding of Isaac, the son of Abraham, and I shall account it to you as a binding of yourselves before Me. The Torah tells us: Abraham look up and behold, he saw a ram caught in the thicket by its horns [Genesis 22:13]. This teaches us that the Holy One, blessed be God, showed our ancestor Abraham the ram tearing himself free from one thicket and becoming entangled in another. Said the Holy One, blessed be God, to Abraham: Thus are your children destined to be caught in iniquities and entangled in misfortunes, but in the end they will be redeemed by the horns of a ram. Therefore the prophet Zechariah said of the time of redemption: And the Lord shall be seen over them, and his arrow shall go forth like the lightning; and the Lord God shall blow the shofar, and shall move in stormy winds of the south [Zechariah 9:14]. [Rosh Hashanah 16a]
According to Leo Rosten, “The bend in the shofar is supposed to represent how a human heart, in true repentance, bends before the Lord. The ram's horn serves to remind the pious how Abraham, offering his son Isaac in sacrifice, was reprieved when God decided that Abraham could sacrifice a ram instead. The man who blows the shofar is required to be of blameless character and conspicuous devotion; he must blow blasts of different timbre, some deep, some high, some quavering.”

May we always bend before the Lord in true repentance.
Posted by Charisa