Soup for a Yucky Day

Three of us have been fighting colds and sore throats for the past couple of days.

T’s nickname has become Snots and we have tissue boxes placed strategically throughout the house.

I’ve discovered a mom needs a lot more arms to wipe an active baby’s nose (well, not really discovered because he is #5 but I have remembered—you forget some of those things!) I need 2 arms to hold his head, 2 arms to hold his arms, and 1 arm to actually do the wiping! It’s like alligator wrestling over here!

I made some potato soup last night..and it was perfect for those of us that felt yucky.  Rachel learned how to make in her cooking class at co-op a couple of years ago. 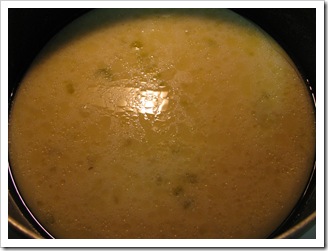 Here’s the recipe for you!

And for your viewing pleasure, T getting ready to have a meltdown due to that crazy pot and lid in his hands. For some reason that lid wouldn’t stay on when he moved it. :) It drove him nuts!!