2 weeks ago we had a CRAZY storm here. A Super Derecho.  yea. I had never heard of that either.

It left us desperate for electricity and water for the weekend. And very needing to take showers.

The eldest finally broke down and washed her hair in the baby pool because she had to go to work. 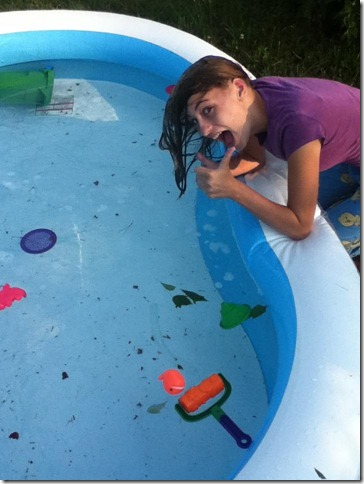 It was crazy hot as well and when I was in my most annoying whiny just stating the facts mode.  The hubs said (in his most cheery voice) “It’s just like camping”

To which I responded (in my I am going to knock you out voice)  “I have bathhouses when I camp!”

Electric being out I can deal with. Water…not so much.

But we survived. :)  And cheered when it all came back on. And we all quickly ran to flush some toilets.